Up&down along cilia in green algae

As a model organism, Chlamydomonas reinhardtii (biflagellated single-celled green algae) has many advantages including short generation time, little space to grow, nuclear and chloroplast genomes sequenced and can be genetically modified. Chlamydomonas is particularly used to elucidate fundamental cellular processes such as photosynthesis, light perception and the structure and function of cilia.

At the Max Planck Institute of Molecular Cell Biology and Genetics in Dresden (Germany) Dr Gaia Pigino is currently studying the assembly of the cilium, the dynamic of the ciliary distal tip and the transport of ciliary proteins from the cell body to the tip, which is mediated by the intraflagellar transport (IFT) machinery. Cilia grow from their tips, to ensure that their constituents are transported along the cilium to reach the growing tip.

Using fluorescent confocal microscopy to image IFT, it is possible to visualize particles moving up and down along the ciliary microtubules. Here we report time-lapse data obtained with CrestOptics X-Light V3 confocal spinning disk on a Chlamydomonas strain that encodes for one of the IFT proteins fused to GFP-like (NeonGreen) reporter to visualize intraflagellar trains in the cilia (also known as flagella) of the algae.

The video shows IFT-NG cells monitored for 5 seconds under a 60x oil objective, where fluorescently labeled subunits are shuttling up and down along the cilia. Thanks to high speed acquisition rate (187 frame per second) of CrestOptics spinning disk it is possible to follow fast moving particles and perform related measurements.

Tracking analysis has been performed in a region of interest by spot detection tool (NIS Element software) and polar graph visualization. The results show the speed of each fluorescent spot identified (the majority shows <9 um/s speed) and the angular direction. Overall, it shows that IFT protein subunits (bright spots) are moving in two main directions respect to axis of the cilium, in other words the flux is both anterograde and retrograde. 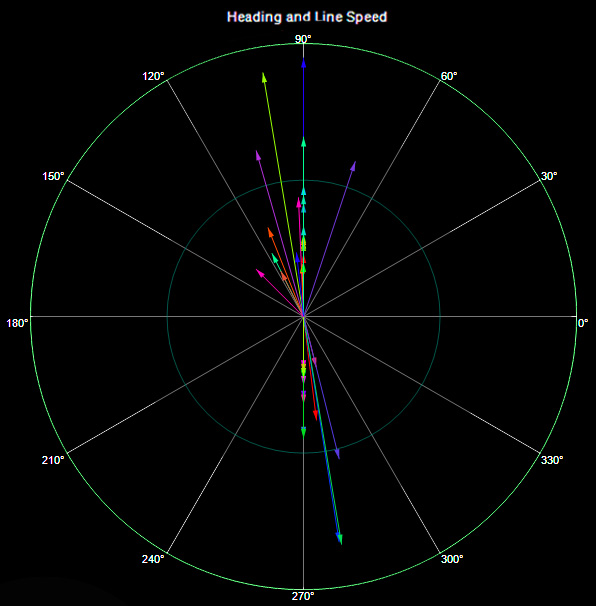 In conclusion, the understanding of the ciliary structure and function and of the molecular mechanisms of ciliary assembly is of fundamental importance for human health. Indeed, several human diseases are associated with defects in the assembly and function of these tiny organelles, including retinal degeneration and blindness, polycystic kidney and liver diseases, obesity, infertility and primary ciliary dyskinesia, developmental disorders such as situs inversus, hydrocephalus and cognitive disorders.

The application note has been prepared in collaboration with Gaia Pigino, Petra Kiesel, Adrian Nievergelt and Dennis Diener