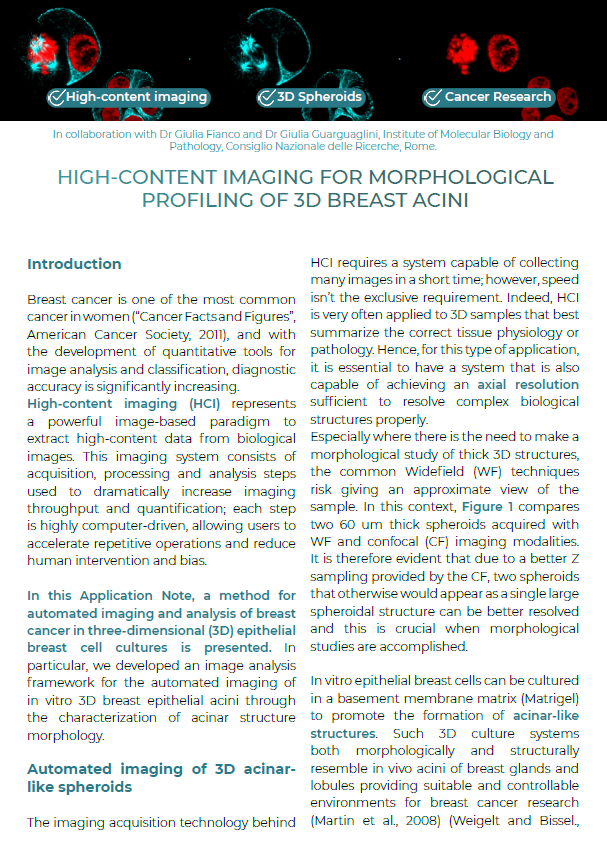 Breast cancer is one of the most common cancer in women (“Cancer Facts and Figures”, American Cancer Society, 2011), and with the development of quantitative tools for image analysis and classification, diagnostic accuracy is significantly increasing.

In this Application Note, a method for automated imaging and analysis of breast cancer in three-dimensional (3D) epithelial breast cell cultures is presented. In particular, we developed an image analysis framework for the automated imaging of in vitro 3D breast epithelial acini through the characterization of acinar structure morphology.

The imaging acquisition technology behind HCI requires a system capable of collecting many images in a short time; however, speed isn’t the exclusive requirement. Indeed, HCI is very often applied to 3D samples that best summarize the correct tissue physiology or pathology. Hence, for this type of application, it is essential to have a system that is also capable of achieving an axial resolution sufficient to resolve complex biological structures properly.

Especially where there is the need to make a morphological study of thick 3D structures, the common Widefield (WF) techniques risk giving an approximate view of the sample. In this context, Figure 1 compares two 60 um thick spheroids acquired with WF and confocal (CF) imaging modalities. It is therefore evident that due to a better Z sampling provided by the CF, two spheroids that otherwise would appear as a single large spheroidal structure can be better resolved and this is crucial when morphological studies are accomplished.

In vitro epithelial breast cells can be cultured in a basement membrane matrix (Matrigel) to promote the formation of acinar-like structures. Such 3D culture systems both morphologically and structurally resemble in vivo acini of breast glands and lobules providing suitable and controllable environments for breast cancer research (Martin et al., 2008) (Weigelt and Bissel., 2008). 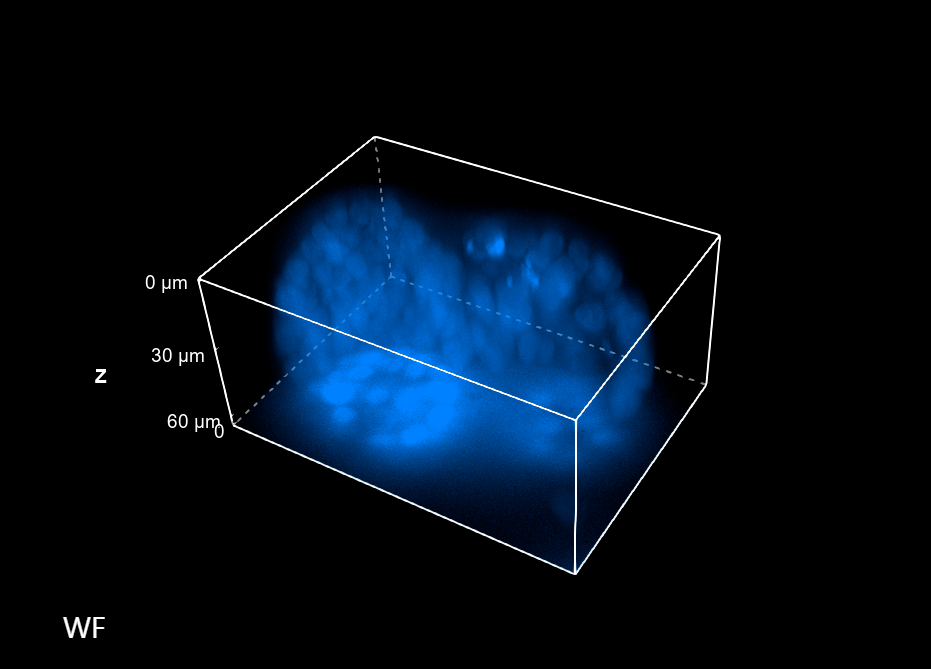 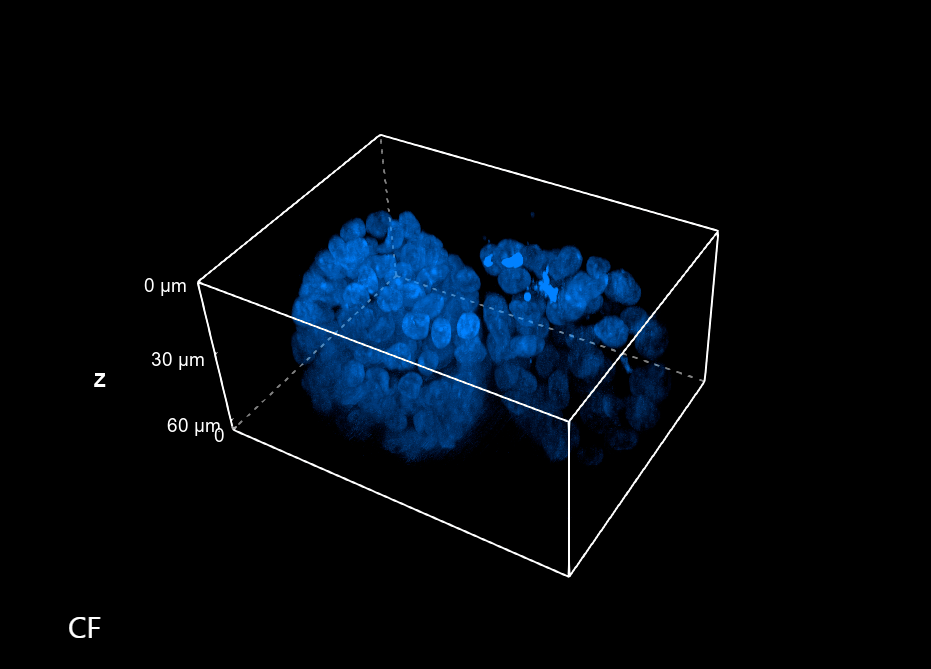 Figure 2 shows two representative early stages (three days in vitro, DIV 3) non-malignant acini grown in 3D Matrigel suspensions. Tubulin (green) identifies the skeleton and therefore the structure of the spheroid, while pericentrin (red) identifies the correct orientation of the mitotic spindle and, therefore, the symmetry of cell divisions within the spheroid.

During the early stages of development, acinar structures begin to assume a very regular and circular architecture with polarized luminal epithelial cells. Due to cellular junctions and adhesion proteins, neighboring cells have close lateral membranes. Cells face the hollow growing lumen on their apical sides, while their basal sides contact the surrounding ECM proteins.

In malignant cancers, loss of cell polarity causes changes in the morphology of acinar structures and, in this study, we investigated morphological features like acinus volume, sphericity, elongation, surface, and diameter. 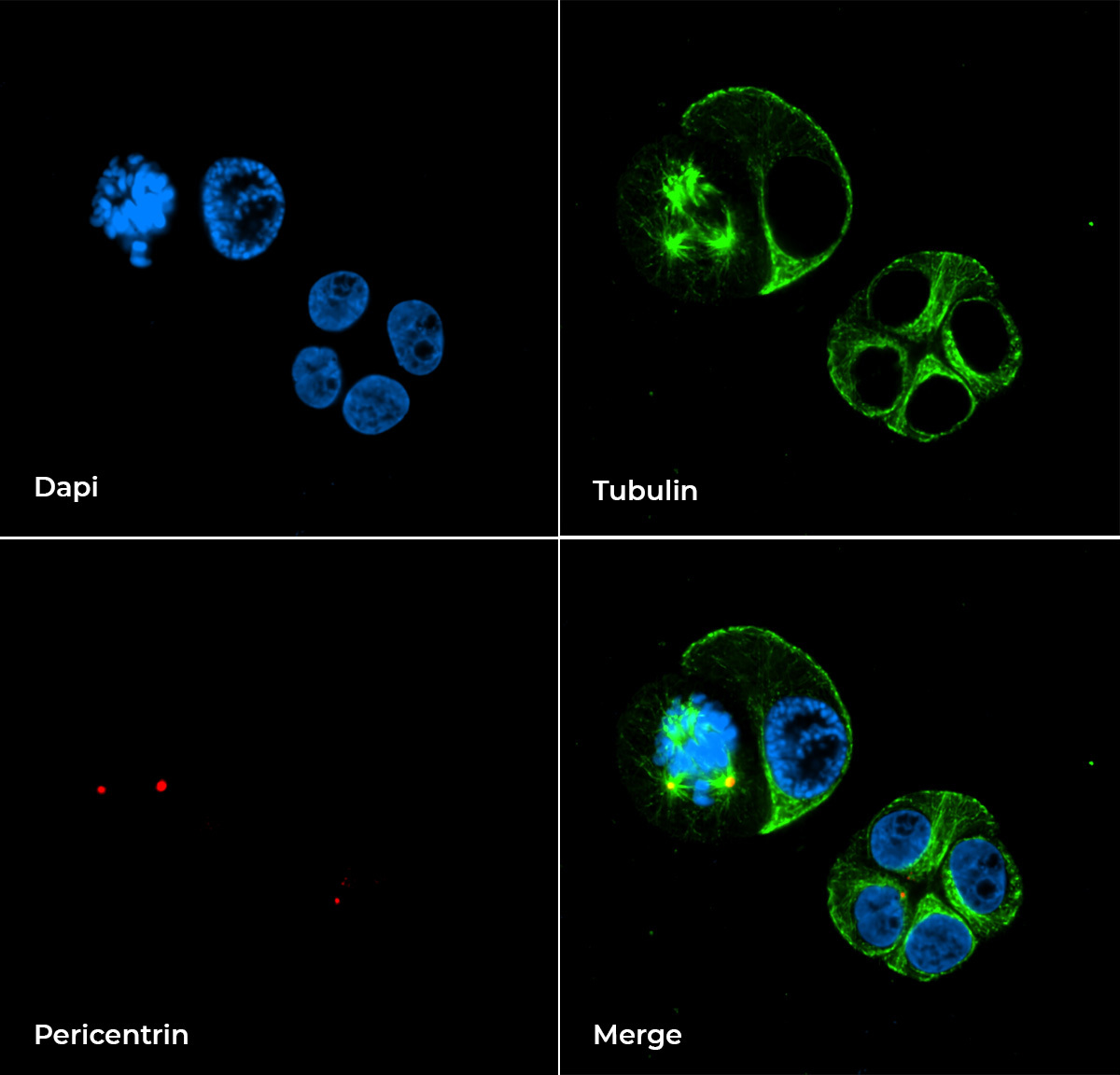 For this purpose, we defined an HCI pipeline (Figure 3) using the NIS-Elements JOBS module. The JOBS module for NIS-Elements software enables users to design experiments with customized acquisition and analysis software, without any knowledge of advanced data programming. Any experiment can be created by dragging and dropping the functions the user wants to cascade or overlap and, in Figure 3, our example of imaging workflow is presented. In particular, DIV 6 acini (both non-malignant and tumorigenic cell lines) were cultured in 96-well plates and using the imaging protocol, we were able to select wells and perform multicolor (DAPI, GFP, and RFP) Z-Stack (60 um) acquisitions, in a fully automated manner, with a 20x air objective (CFI Plan Apochromat Lambda D 20x, Nikon, 0.8 NA and 0.8 mm WD). 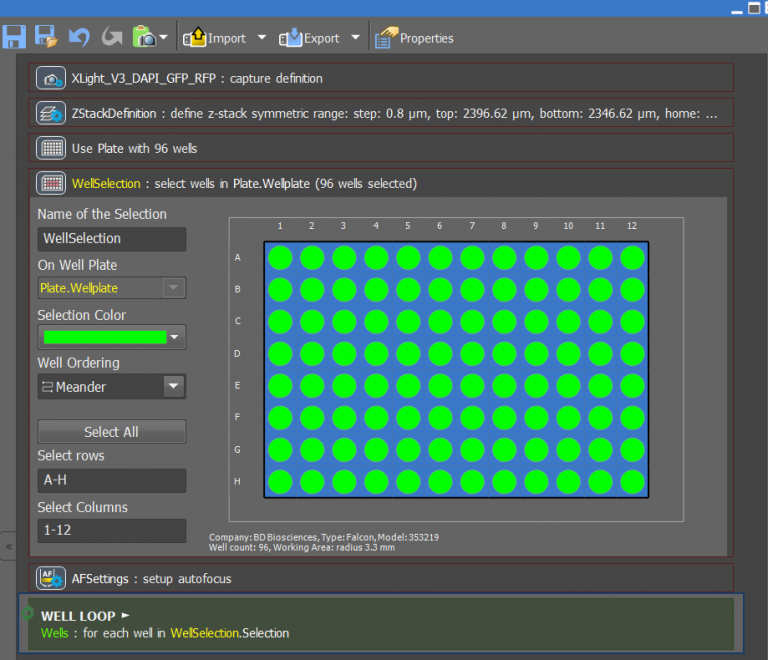 Figure 3: Example of JOB definition workflow. Multicolor Z-stacks were acquired in a loop in each selected well.

Figure 4 shows a maximum intensity projection (MIP) of 60 um Z-stack of non-malignant (A) and tumorigenic (B) acini. By providing homogeneous illumination over the entire 25 mm field of view (FOV), the X-Light V3 confocal spinning disk allowed us to analyze a large number of acini, reducing the number of images required to obtain robust data and, therefore, minimizing acquisition time. 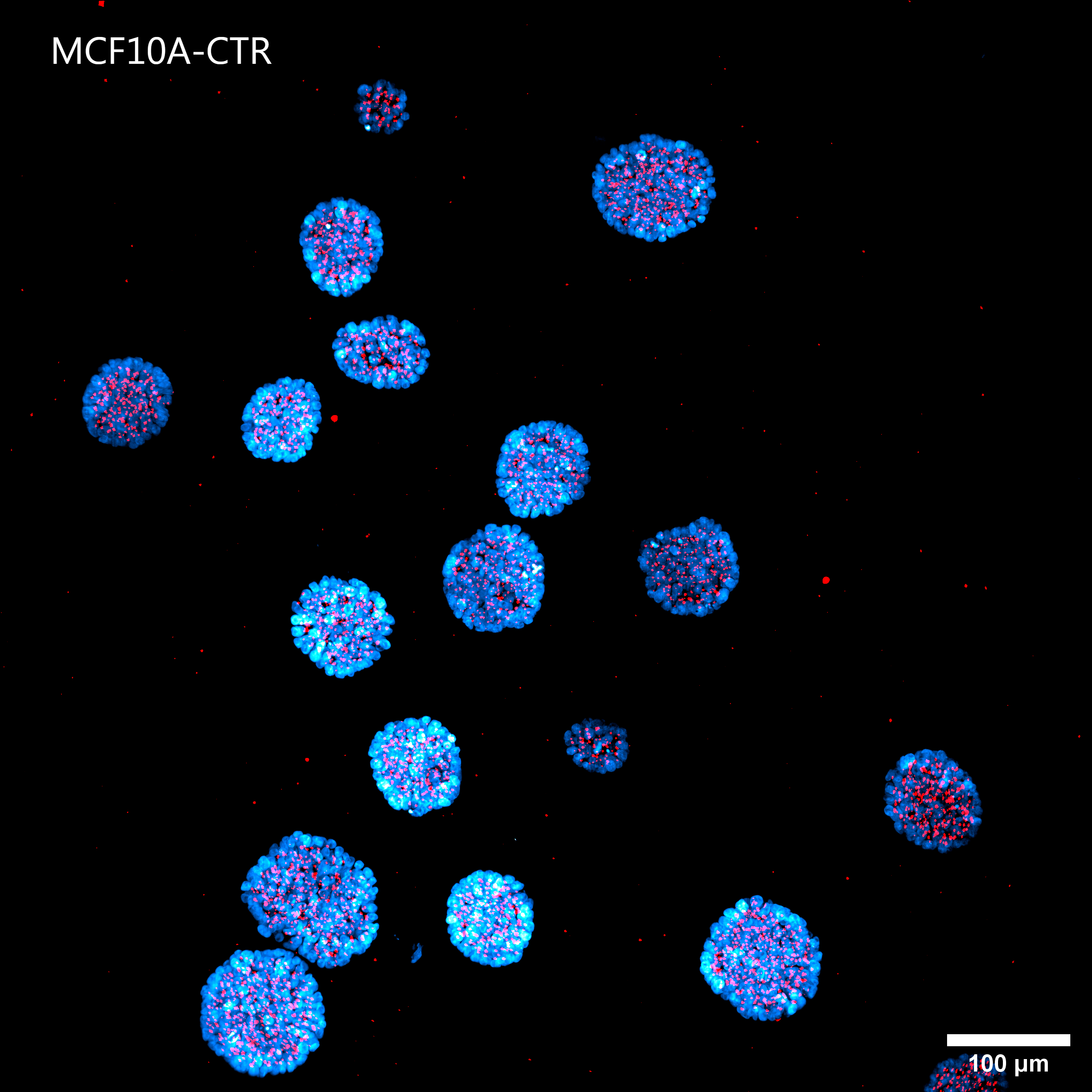 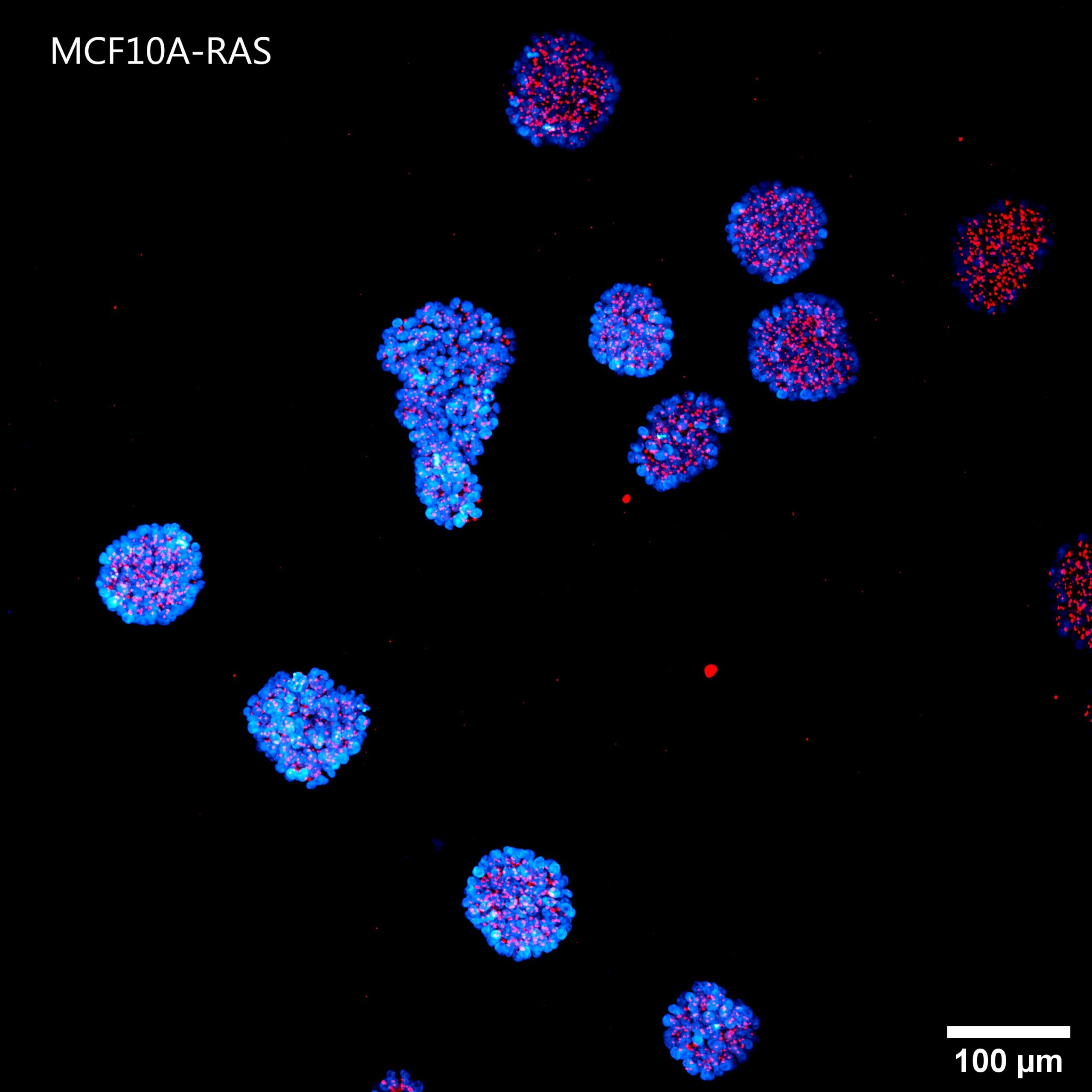 Figure 4: MIP from 60 um Z-stack of non-malignant (A) and tumorigenic acini (B). Cells were cultured in 3D Matrigel suspensions and stained with pericentrin (red) and DAPI (blue). These images were acquired with a CFI Plan Apochromat Lambda D 20x air objective (20x, Nikon, 0.8 NA and 0.8 mm WD).

Matrigel matrix is crucial to support the growth of acini and for the proper formation of their 3D architecture; however, the embedding of the sample in such a dense and opaque matrix can make imaging more complicated. It is also possible for Matrigel preparations to have a high degree of autofluorescence, which reduces the signal-to-noise ratio. Despite these challenges, as demonstrated by the orthogonal projections shown in Figure 5 and by the volume view in Figure 6, the X-Light V3 confocal spinning disk allowed for obtaining excellent sectioning and image quality. 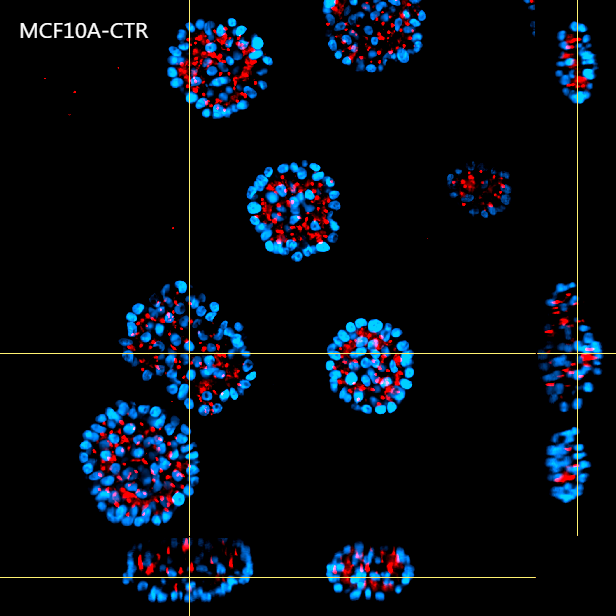 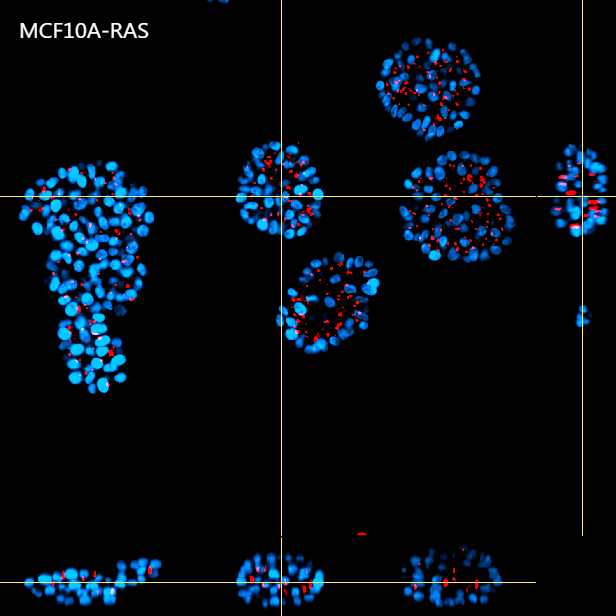 Figure 5: Orthogonal views of non-malignant (A) and tumorigenic acini (B). Cells were cultured in 3D Matrigel suspensions and stained with pericentrin (red) and DAPI (blue). These images were acquired with a CFI Plan Apochromat Lambda D 20x air objective (20x, Nikon, 0.8 NA and 0.8 mm WD).

Once the HCI was completed, we performed an automation analysis to determine morphological profiles of the 3D breast culture acini.

Morphological studies of the acinar structures were accomplished using NIS-Elements General Analysis (GA3), an analysis pipeline with artificial intelligence (AI) capabilities. The combination of multiple conventional segmentation tools and AI techniques can enable customized measurements tailored to specific experiments, and this can be employed across high-content datasets as well. As represented in Figure 7A, we created an analysis pipeline based on five steps: Denoising, Deconvolution, Thresholding, Object counting and Measurements. The previously acquired high-content data can be automatically analyzed using this procedure, obtaining information about volume (um3), surface (um2), elongation (um), sphericity and diameter (um), allowing us to gain more insight into the morphological characteristics of 3D breast cultures (Figure 7B). 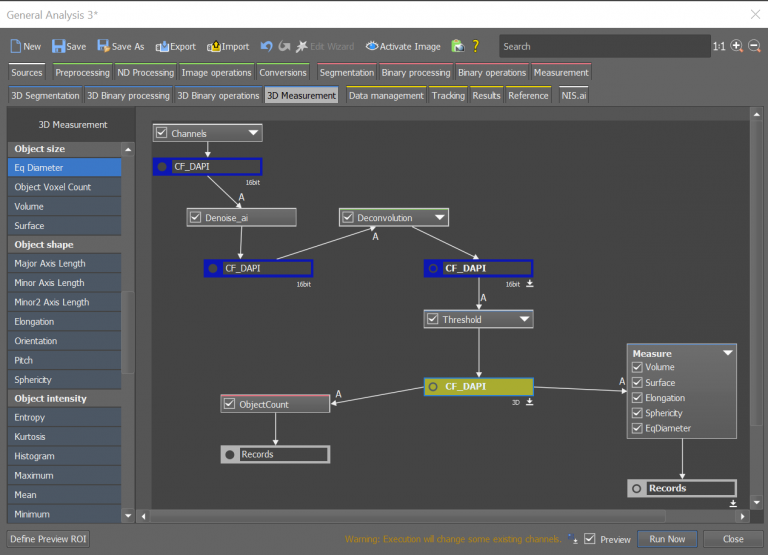 Using such an automated analysis pipeline, we have collected a wide range of information useful in understanding how mutated Ras receptors affect the proliferation and morphology of acini. As shown in Figure 8A, acinar structures from cultures of non-malignant breast cancer typically have round symmetrical shapes. On the other hand, the acini from malignant breast cancer cultures cause a deformation in the 3D architecture which causes the shape of the acini to be more elongated and deconstructed. Notably, the spheroids derived from the MCF10A K-Ras engineered line has a significant volume increase compared to the control line (Figure 8B). In fact, the transforming contribution of the k-Ras oncogene correlates with the increase in the cellular proliferative rate, and this causes an increase in volume already after 6 days in culture. 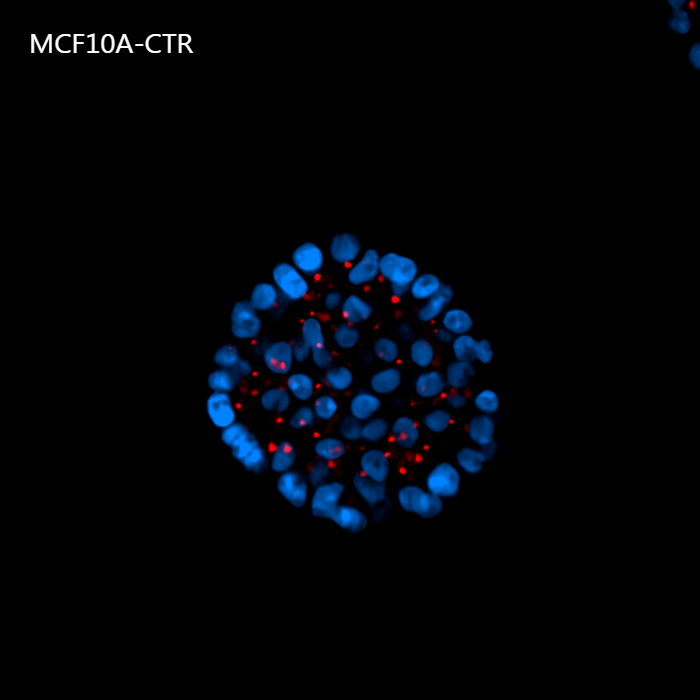 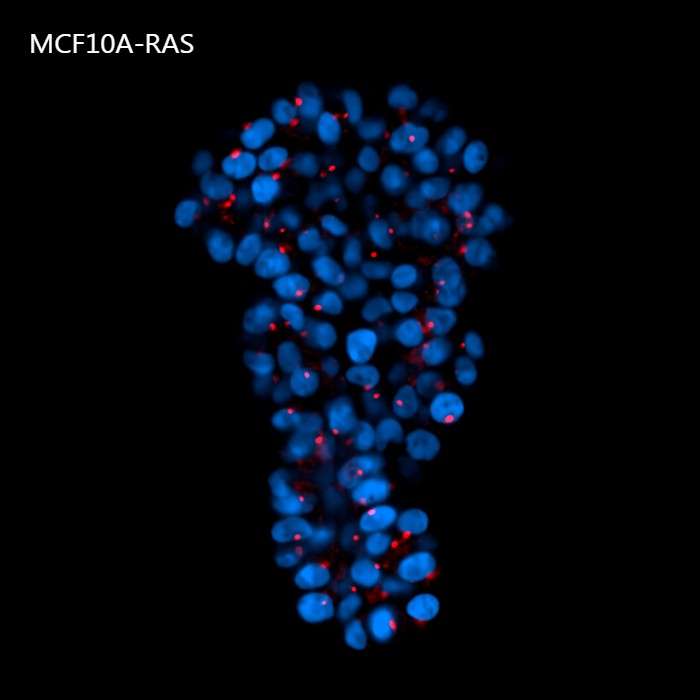 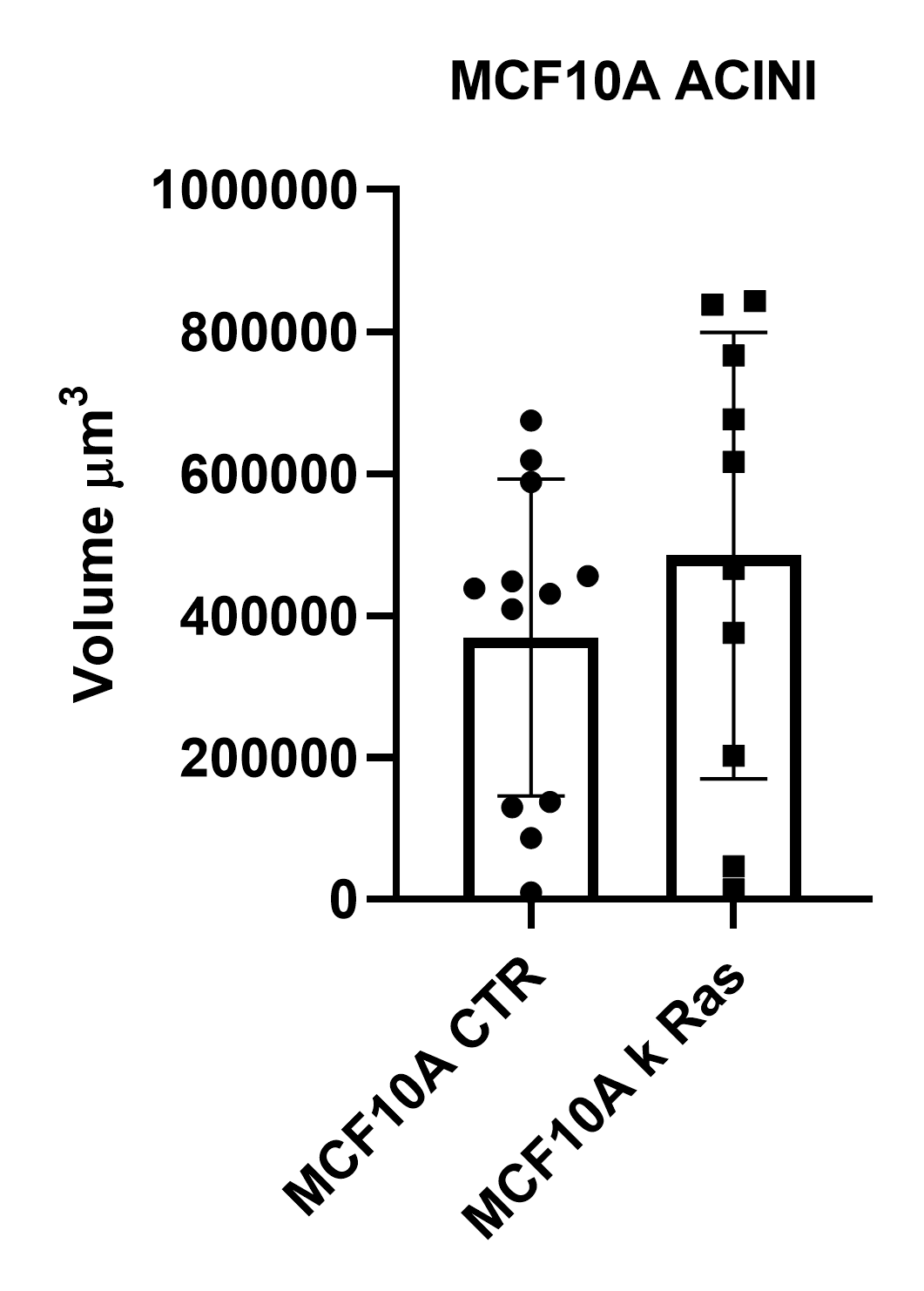 The imaging pipeline described in this application note, based on the CrestOptics X-Light V3 spinning disk, represents a robust solution for high-content imaging. Due to its uniform illumination across a 25 mm field of view, the X-Light V3 is able to image a large population of cells to obtain robust data in a short time. With the highest spinning disk rotation on the market (15K rpm), the X-Light V3 offers an achievable speed of over 1000 fps on full FOV, over 10 times faster acquisition compared to the fastest point scanning confocal. High-speed, high-sectioning and ultra-large FOV make the X-Light V3 spinning disk confocal the ideal solution to face HCI and collect huge datasets without compromising image quality.

This powerful imaging system, coupled with software capable of automating acquisitions and analyses, made it possible to compare morphological characteristics between non-malignant (CTR) and malignant (K-Ras) cancer cells. Studying some morphological features such as volume, elongation, sphericity, diameter and surface, we found that malignant cancer spheroids display a loss of cell polarity during proliferation that alters acinar structure and architecture. 3D cellular models, therefore, are useful tools for re-creating in vitro tumor pathological phenomena. The combination of high-content microscopy with 3D cell models could thus contribute significantly to cancer research, especially in the validation of oncologically relevant molecules.

Cells were cultured in 3D Matrigel suspensions and stained with pericentrin, tubulin and DAPI after 3 days and 6 days in culture.