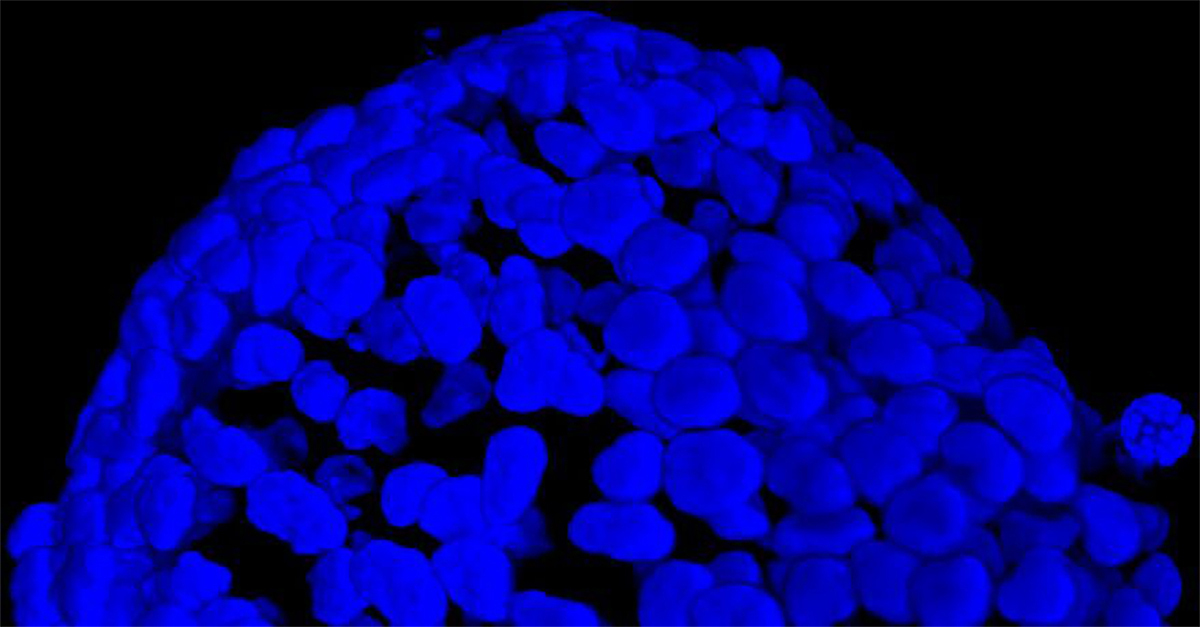 On the contrary, the cell growth in three-dimensional (3D) conditions stimulates the acquisition of a more relevant cytoarchitecture, offering the opportunity to establish cell-cell or cell-matrix interactions, thus creating a spatial organization that closely mimics the native environments of tumors. 3D cell culture models exhibit heterogeneity and structural complexity that reflect in vivo tumors, providing a more accurate representation of tumor physiology as occurring in cancer disease.

At the Institute of Biochemistry and Cell Biology (National Research Council of Italy, Rome), Dr. Fabiola Moretti and her group are studying the mechanisms regulating the cellular response to stress stimuli, with a particular interest in hormone-dependent tumors. Dr. Rita Assenza in the Moretti’group has applied 3D cell culture system to study tumor cell response to combinatorial treatment of chemotherapies and target therapies.

To generate 3D spheroids, NCI-H460 cells (derived from a non-small cell lung cancer) were seeded in ultra-low attachment plates at two different densities: 3×103 cells/well or 700 cells/well. After reaching about 400-500 or 150-200 um diameter, respectively, spheroids were treated with a cytotoxic agent for 6 days. The drug’s effects were visualized and evaluated by Live/Dead staining using Calcein AM and Propidium iodide (PI). Calcein AM is a cell-permeable dye used to determine cell viability. The non-fluorescent Calcein AM converts to (green) fluorescence Calcein after hydrolysis by intracellular esterases in living cells. PI is a red fluorescent nuclear stain commonly used to detect dead cells as it does not enter intact viable cells. Lastly, Hoechst dye stains cell nuclei in blue.

The comparison between the images acquired with the 20x air objective and those with the 25x silicone oil objective (Figure A, B and C) highlights the importance of the lens choice based on the biological application. The transition from 20x to 25x leads to a gain in resolution (based on the greater NA of the 25x compared to the 20x NA), which certainly affects the image quality, and also leads to a reduction in the light refraction. As a matter of fact, immersion oils greatly improve the microscope’s resolving power  by replacing the air gap between the lens and the coverslip with a higher refractive index medium, thus allowing to reduce the refraction of light.

In conclusion, 3D tumor spheroid cultures are emerging tools providing more physiologically representative models of cancer disease. With their 3D complexity, they represent a decisive step forward compared to traditional 2D and are laying the foundation for the creation of screening platforms for anti-cancer drug discovery.

In 3D imaging, matching the refractive index of the sample and its immersion medium is crucial for deep tissue observation. Silicone immersion oil is perfect for imaging through thick biological samples; it closely matches the refractive index of cells and of the mounting medium, decreasing spherical aberration and resulting in brighter and higher resolution images compared to those acquired with a common 20x air objective. 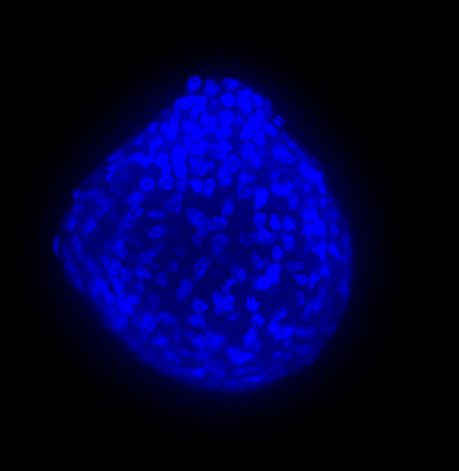 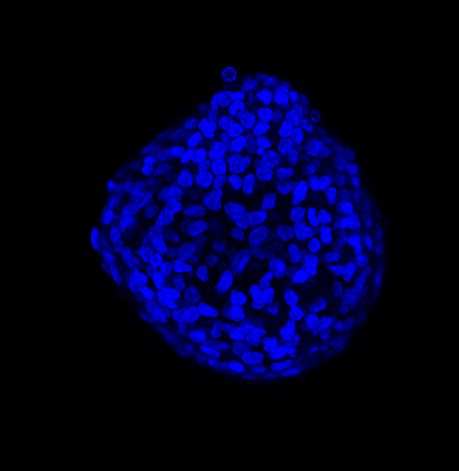 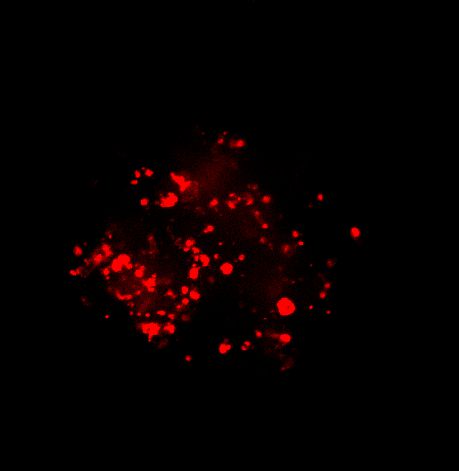 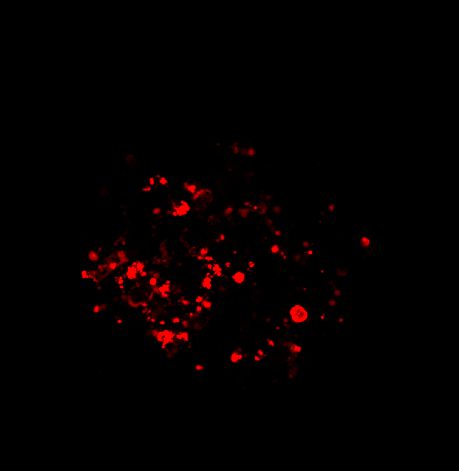 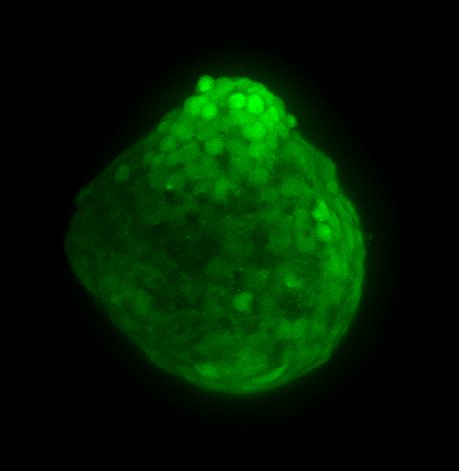 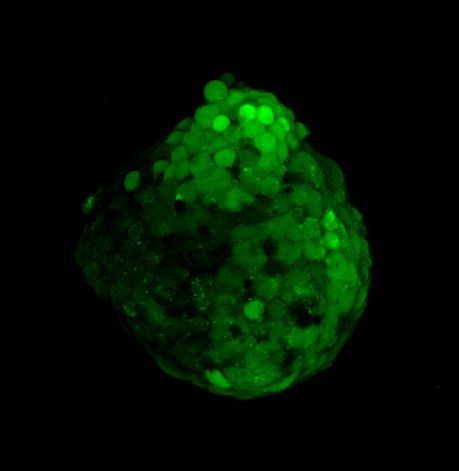 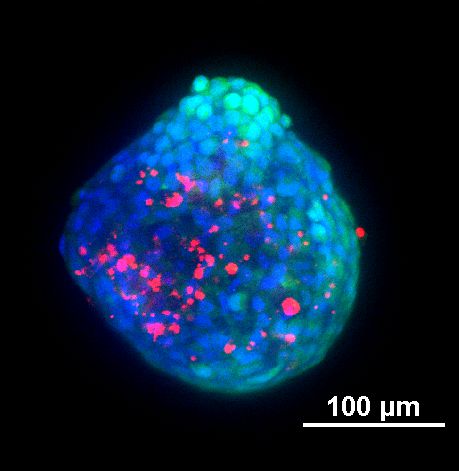 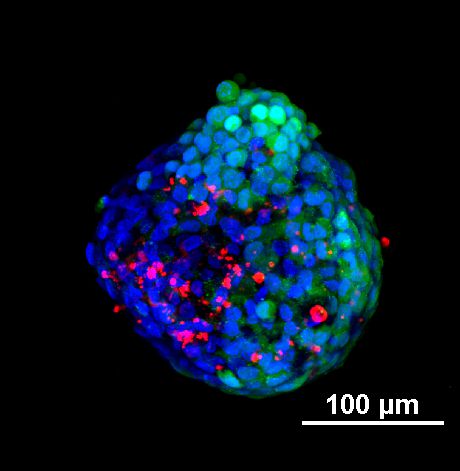 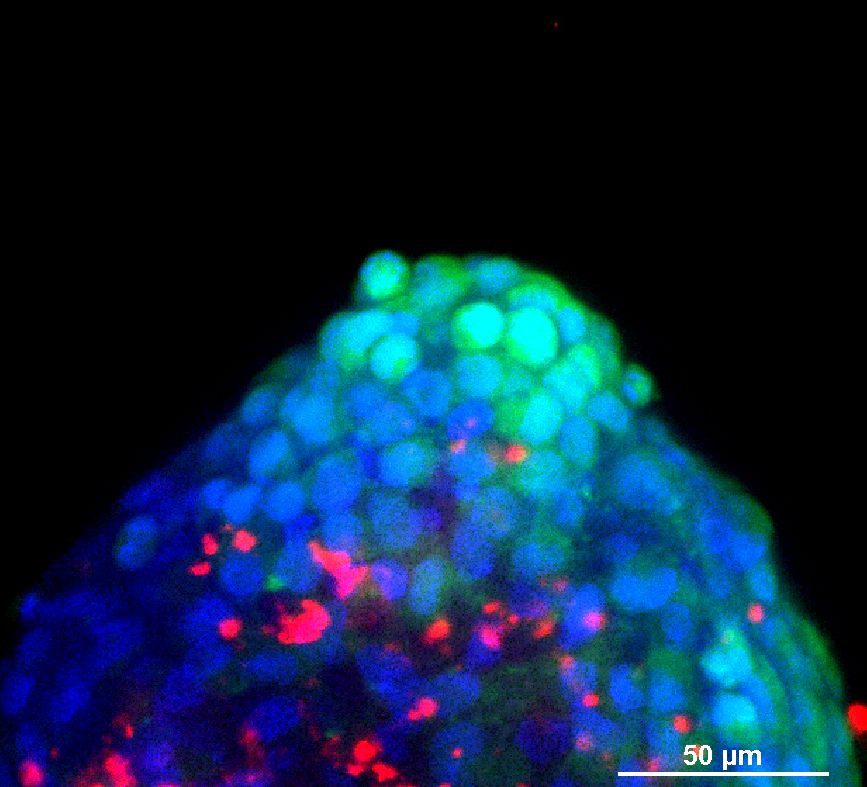 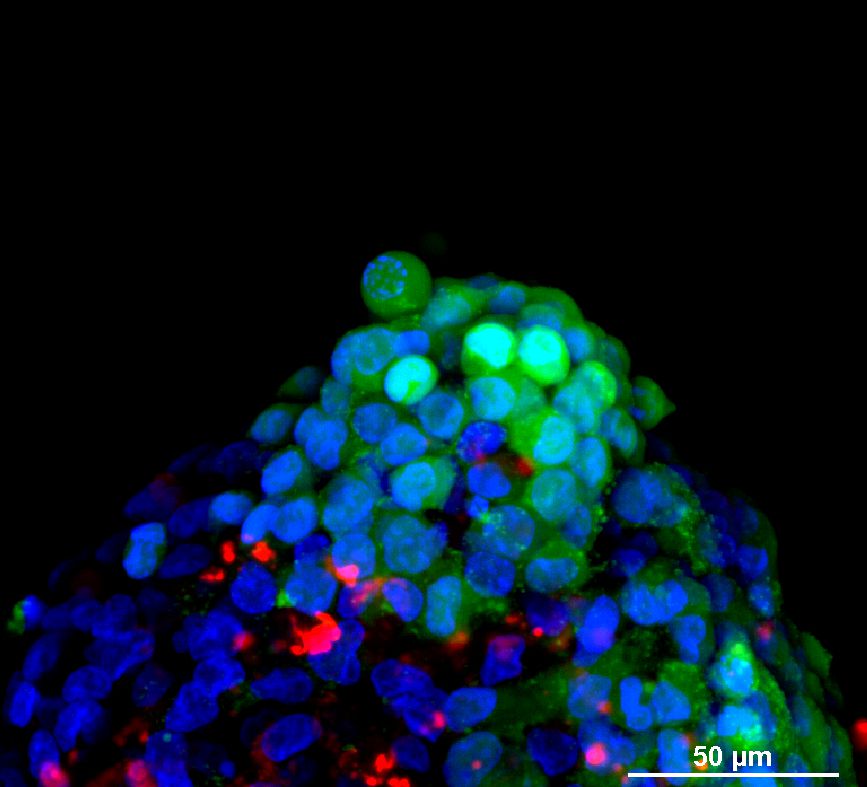 Figure B: Zoom of the same region of the 3D spheroid acquired with the 20x air objective (LEFT) and with the 25x silicone objective (RIGHT). Live cells are labeled with Calcein (green) and dead cells with PI (red). Nuclei are stained with Hoechst (blue). These images were acquired with CrestOptics X-Light V3 spinning disk. 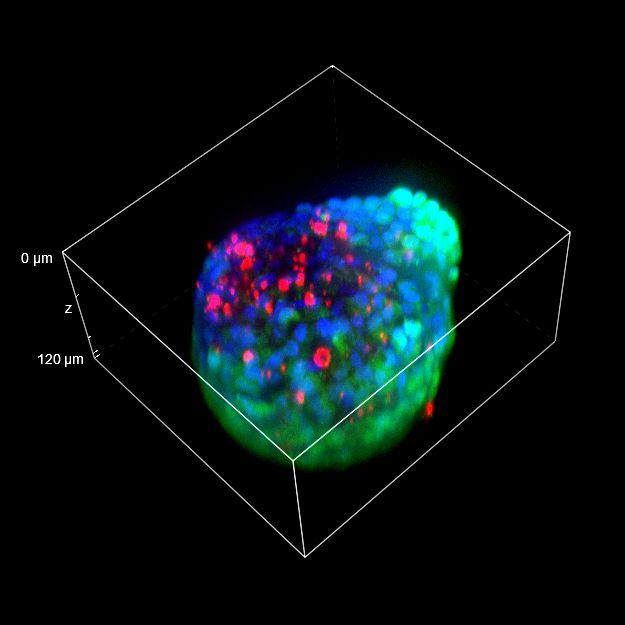 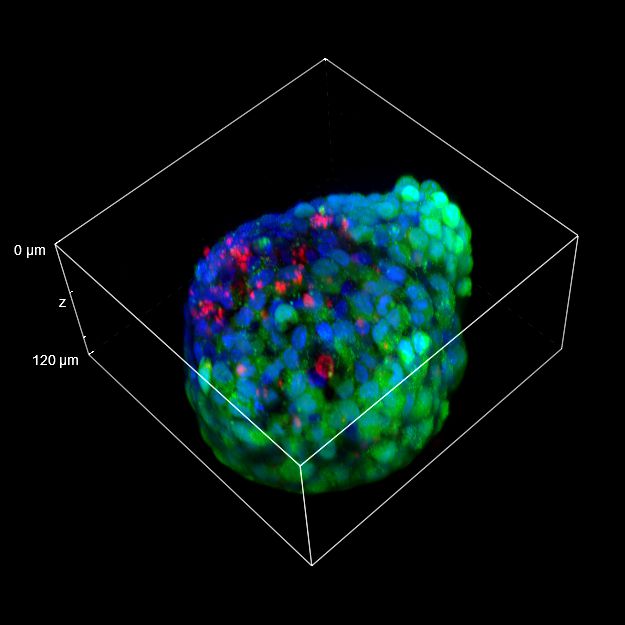 This application note has been prepared in collaboration with Dr Fabiola Moretti and Dr Rita Assenza.

Institute of Biochemistry and Cell Biology 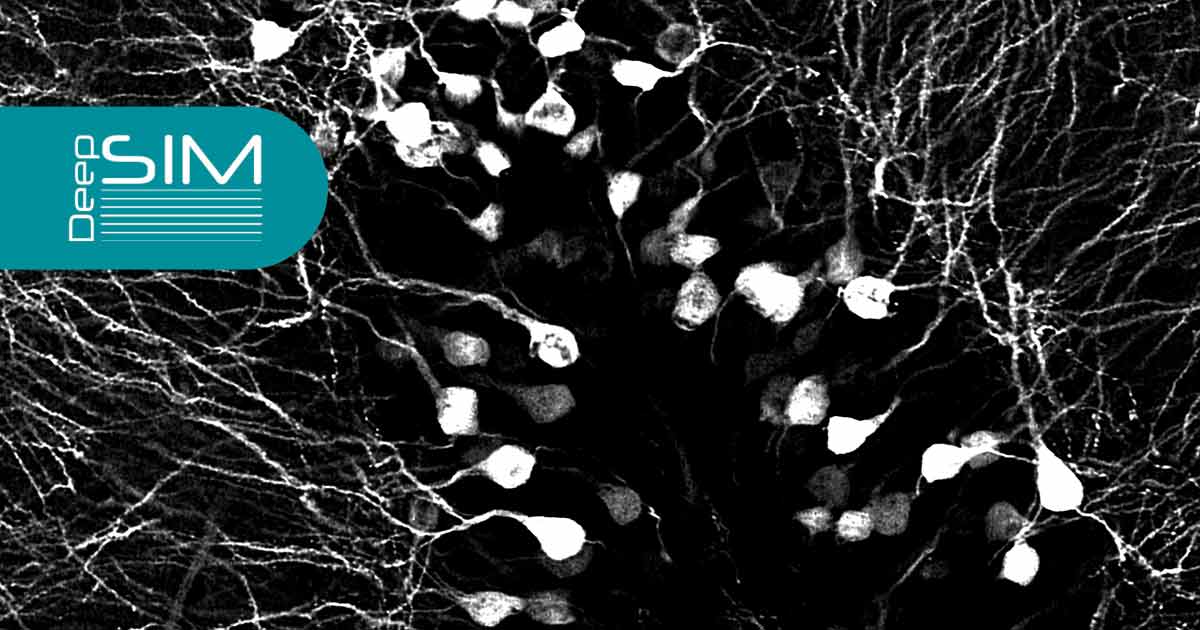