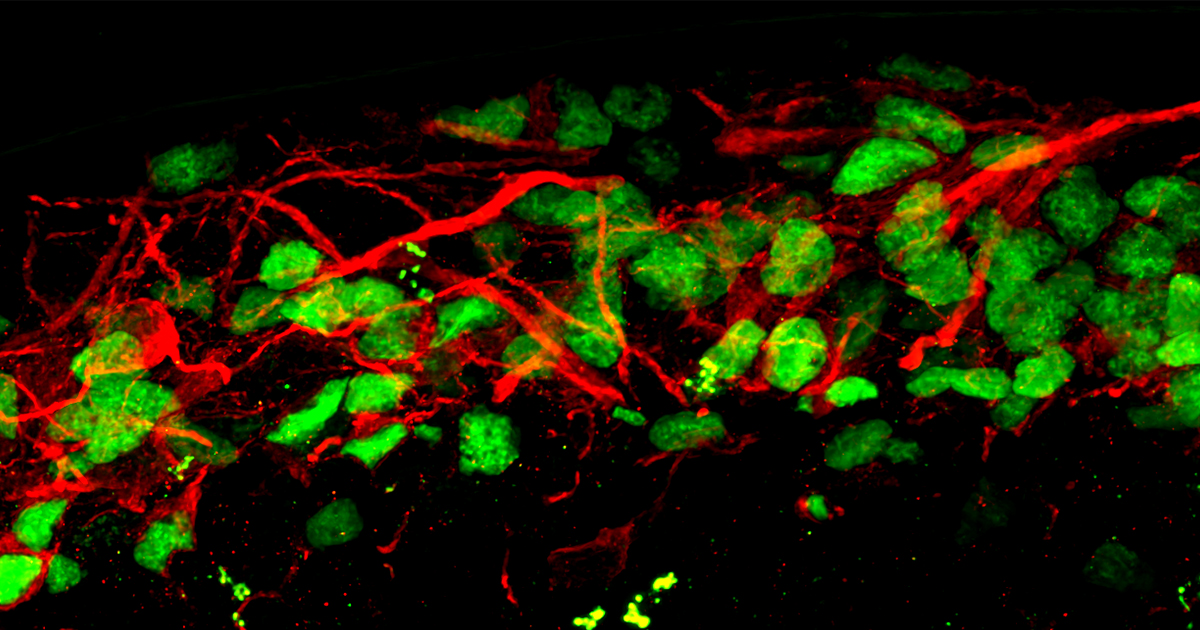 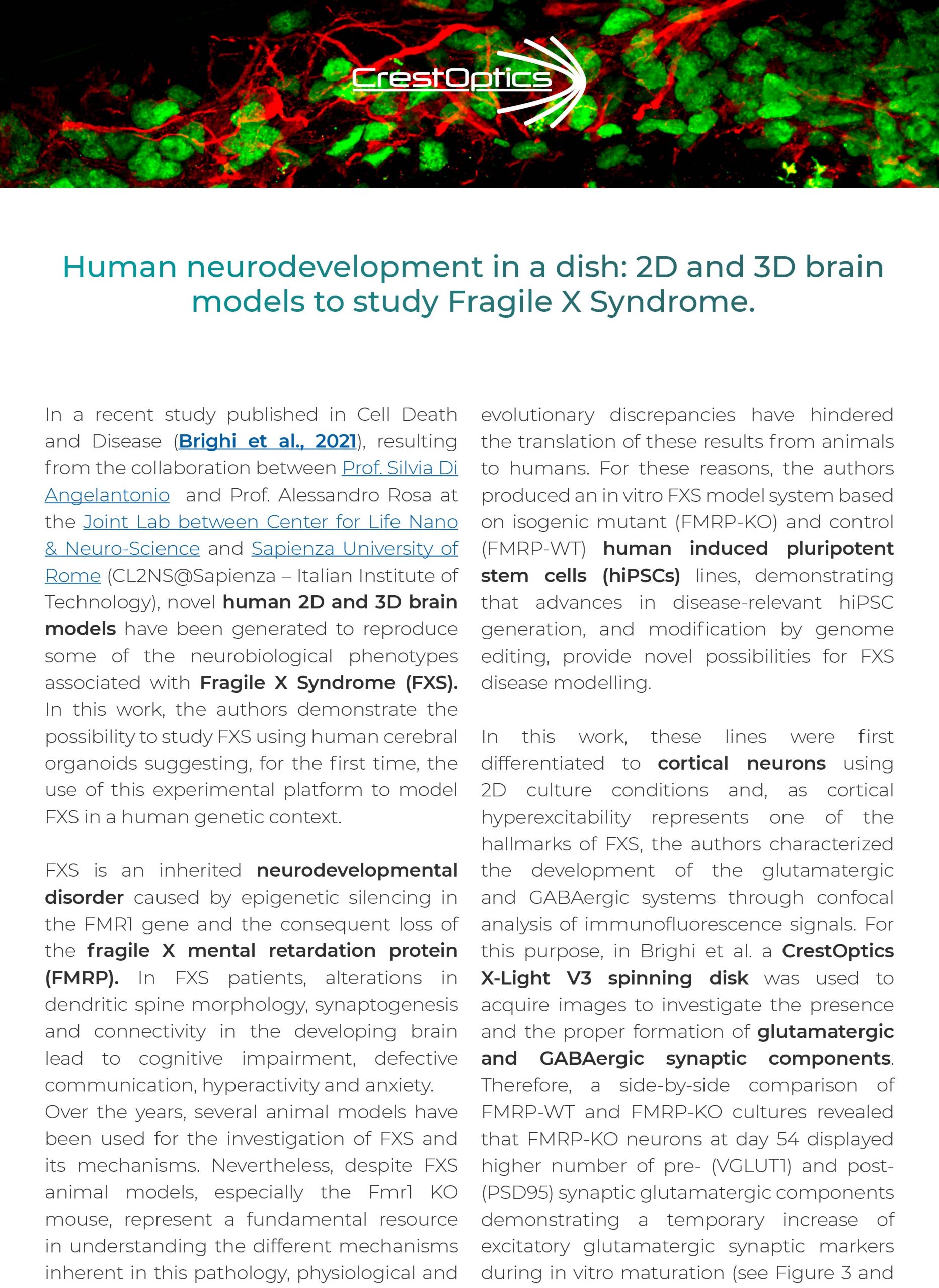 In a recent study published in Cell Death and Disease (Brighi et al., 2021), resulting from the collaboration between Prof. Silvia Di Angelantonio and Prof. Alessandro Rosa at the Joint Lab between Center for Life Nano & Neuro-Science and Sapienza University of Rome (CL2NS@Sapienza – Italian Institute of Technology), novel human 2D and 3D brain models have been generated to reproduce some of the neurobiological phenotypes associated with Fragile X Syndrome (FXS). In this work, the authors demonstrate the possibility to study FXS using human cerebral organoids suggesting, for the first time, the use of this experimental platform to model FXS in a human genetic context.

FXS is an inherited neurodevelopmental disorder caused by epigenetic silencing in the FMR1 gene and the consequent loss of the fragile X mental retardation protein (FMRP).

Over the years, several animal models have been used for the investigation of FXS and its mechanisms. Nevertheless, despite FXS animal models, especially the Fmr1 KO mouse, represent a fundamental resource in understanding the different mechanisms inherent in this pathology, physiological and evolutionary discrepancies have hindered the translation of these results from animals to humans. For these reasons, the authors produced an in vitro FXS model system based on isogenic mutant (FMRP-KO) and control (FMRP-WT) human induced pluripotent stem cells (hiPSCs) lines, demonstrating that advances in disease-relevant hiPSC generation, and modification by genome editing, provide novel possibilities for FXS disease modelling.

In this work, these lines were first differentiated to cortical neurons using 2D culture conditions and, as cortical hyperexcitability represents one of the hallmarks of FXS, the authors characterized the development of the glutamatergic and GABAergic systems through confocal analysis of immunofluorescence signals. For this purpose, in Brighi et al. a CrestOptics X-Light V3 spinning disk was used to acquire images to investigate the presence and the proper formation of glutamatergic and GABAergic synaptic components. Therefore, a side-by-side comparison of FMRP-WT and FMRP-KO cultures revealed that FMRP-KO neurons at day 54 displayed higher number of pre- (VGLUT1) and post- (PSD95) synaptic glutamatergic components demonstrating a temporary increase of excitatory glutamatergic synaptic markers during in vitro maturation (see Figure 3 and Figure 4 of Brighi et al. for the images and the method section “immunostaining and image acquisition and analysis of 2D cultures” for analysis details).

Further analyses on FMRP-KO 2D cultures have highlighted an altered neuronal and glial gene expression and proliferation, an increased network activity and a pronounced hyperexcitability, demonstrating how these 2D in vitro models are able to efficiently recapitulate some of the hallmarks of FXS.

Furthermore, since 3D brain models provide convincing advantages in comparison to conventional 2D cell cultures, both in terms of cellular interactions and tissue complexity, and allow to mimic even more precisely the proper 3D organization of the human brain, the authors present for the first time with this work a 3D human in vitro model of FXS based on hiPSCs-derived cerebral organoids. For this purpose, they generated and characterized 3D self-assembled brain organoids observing the proper formation of ventricular and subventricular regions and revealing the presence of deep-layers cortical neurons during organoids maturation. Setting up FMRP-WT and FMRP-KO cerebral organoids the authors found that the 3D FXS models displayed a significant increase in organoid size and, as well as in 2D conditions, an increase in astrocyte reactivity at different time points.

In summary, the authors demonstrated that these in vitro 3D platforms are capable of recapitulating the development of the FXS cortical phenotype, applying brain organoids as a new promising tool to study this pathology and to provide otherwise hardly accessible human models (see Brighi et al., 2021 for details).

One of the major challenges in cerebral organoid morphological analysis, through immunofluorescence assays, is represented by the presence of an intrinsically heterogeneous cell population within a structure that can reach several millimeters of diameter. Moreover, whole-brain organoids can reproduce different brain regions in vitro, including the dorsal forebrain, the retina and the hippocampus. Therefore, CrestOptics X-Light V3 is a system that allows to acquire an image showing a general overview of the entire tissue in a short time, providing a clear way to identify which are the regions of interest to focus in, still maintaining an excellent resolution. As proof of concept, in Figure A is shown a stitched image representing an organoid slice displaying a clear organization of neural progenitor (SOX2+ in green) cells in a ventricle-like structure; this whole view of the organoid allows to exclude from the morphological analysis the other regions and to focus the attention only on neuroepithelial regions, positive for the marker SOX2 (green). 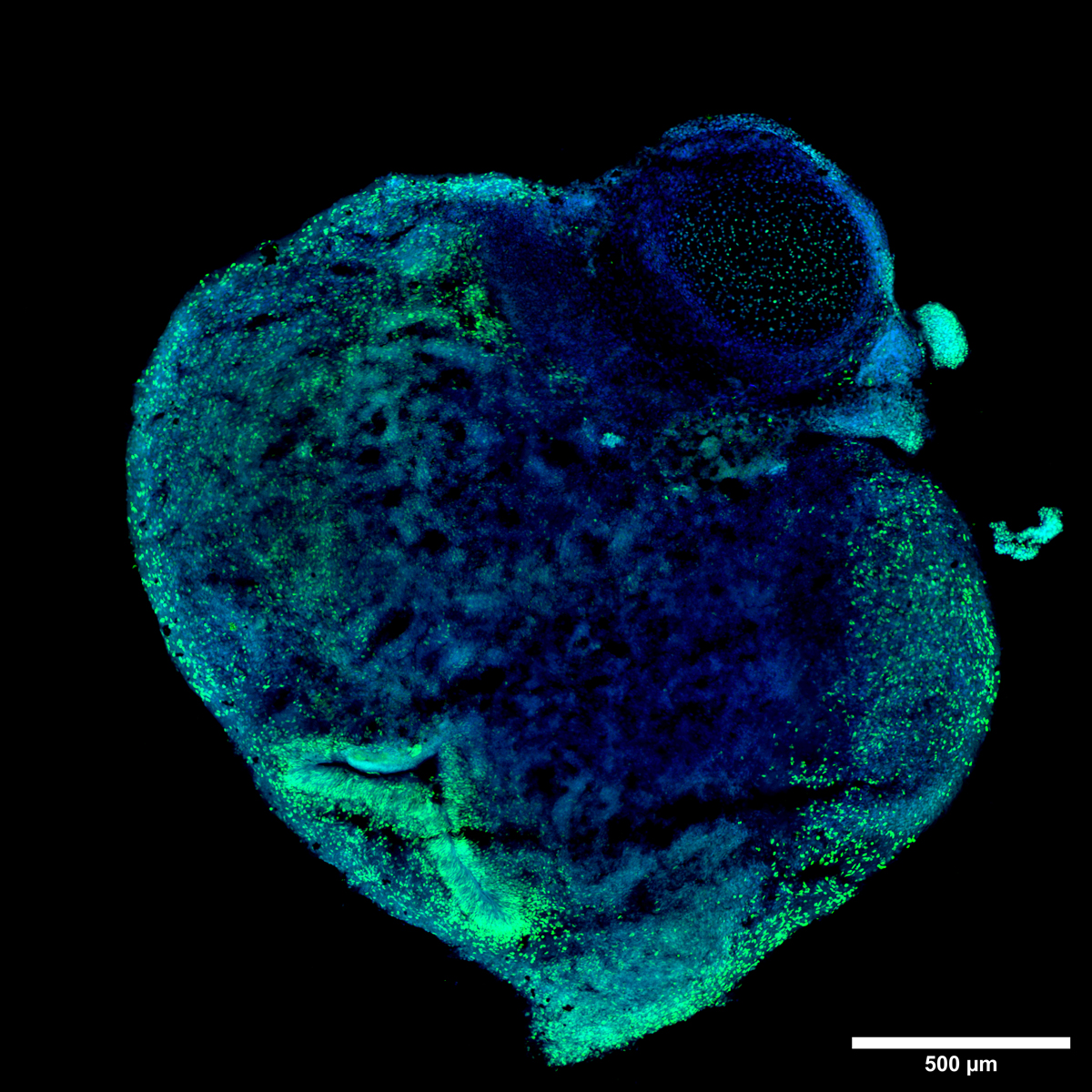 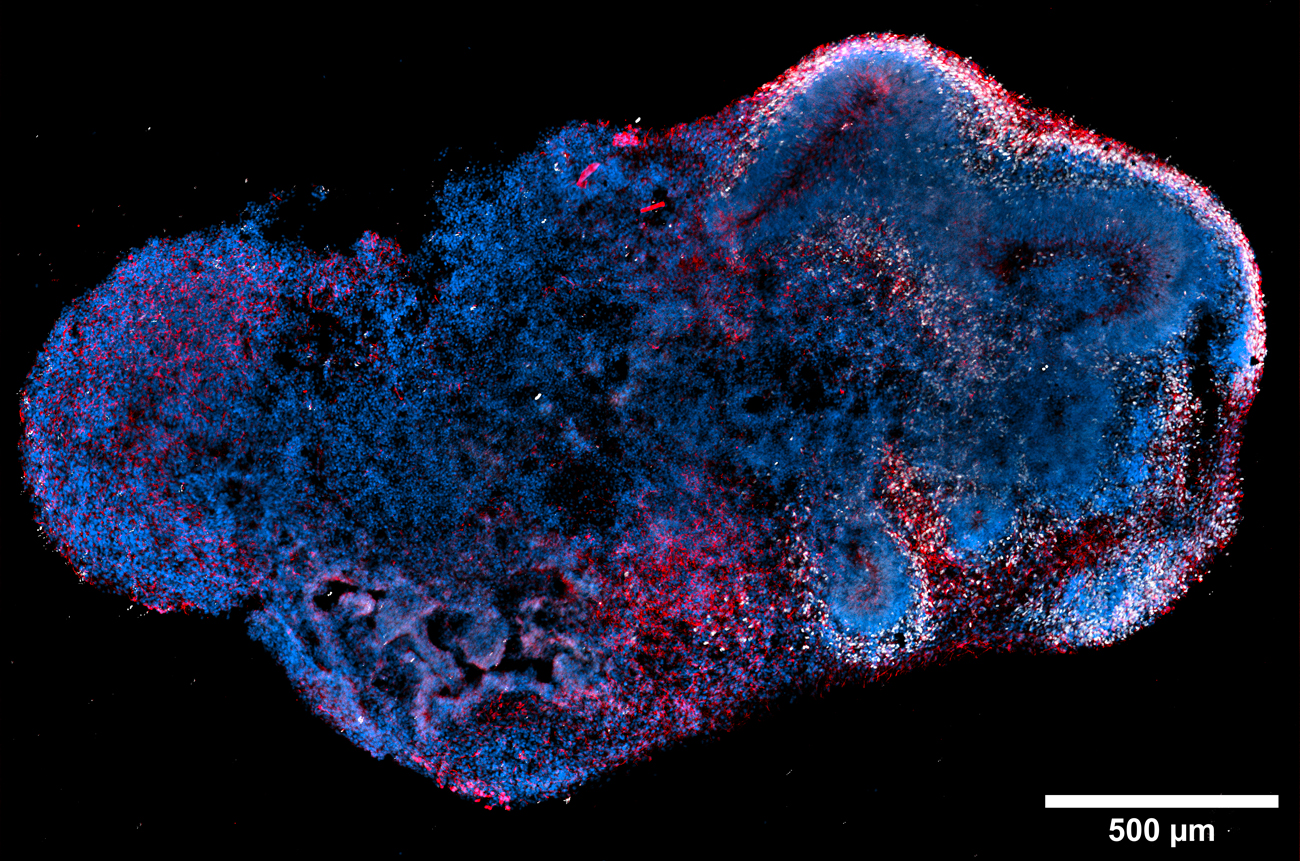 In the same way, as represented in Figure B and similarly to what shown in Brighi et al. paper, it is possible to easily spot the presence of cortical deep-layer neurons (CTIP2+ in white and MAP2+ in red) that, differentiating towards the periphery, shape the typical laminar cortical structure.

Once the area of interest is identified, it is easier to investigate the three-dimensional biological complexity of the cortical region with higher magnification, deepening the cortical layer organization (Figure C). 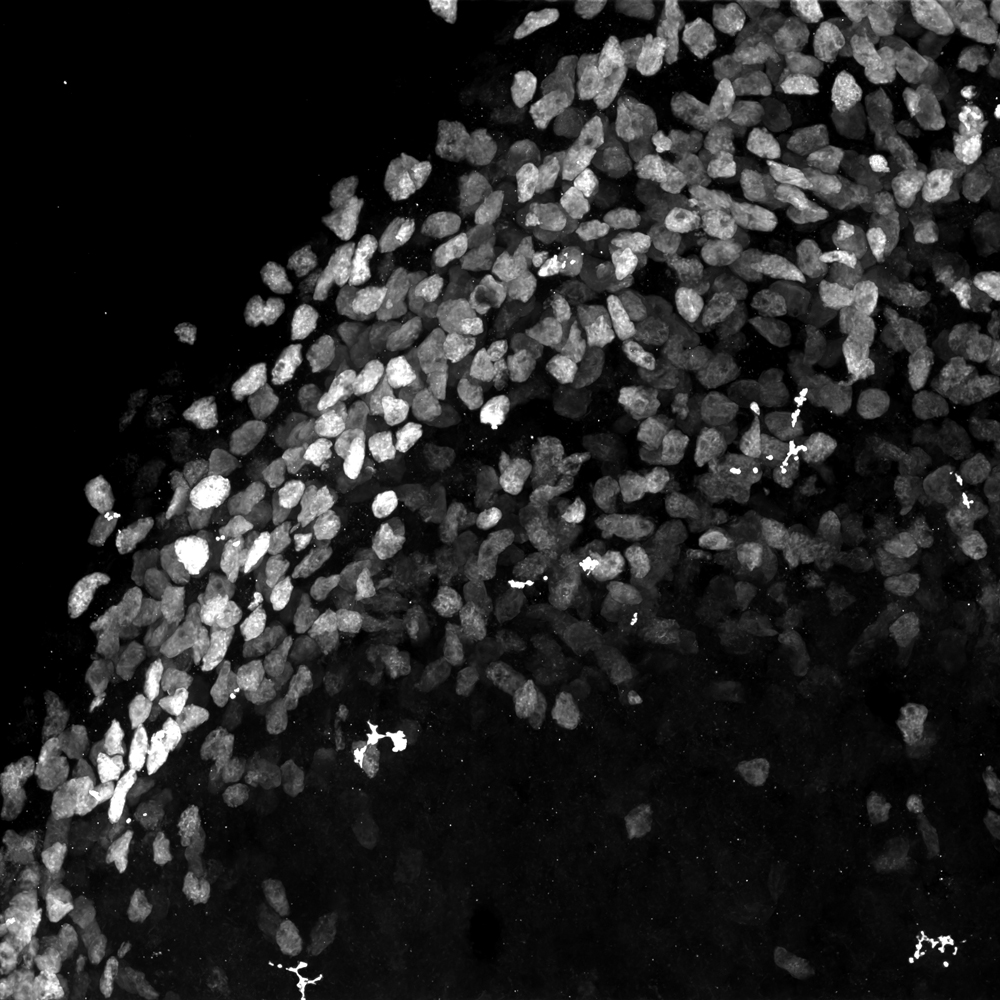 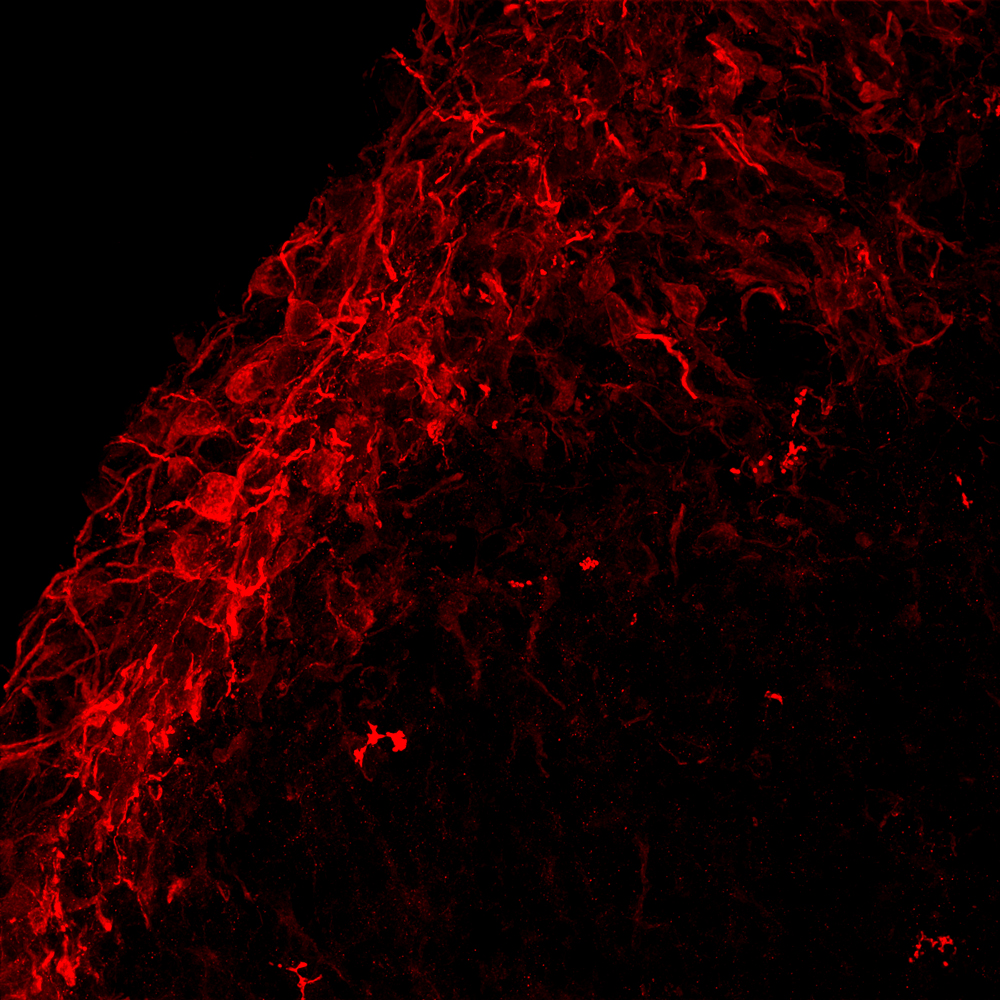 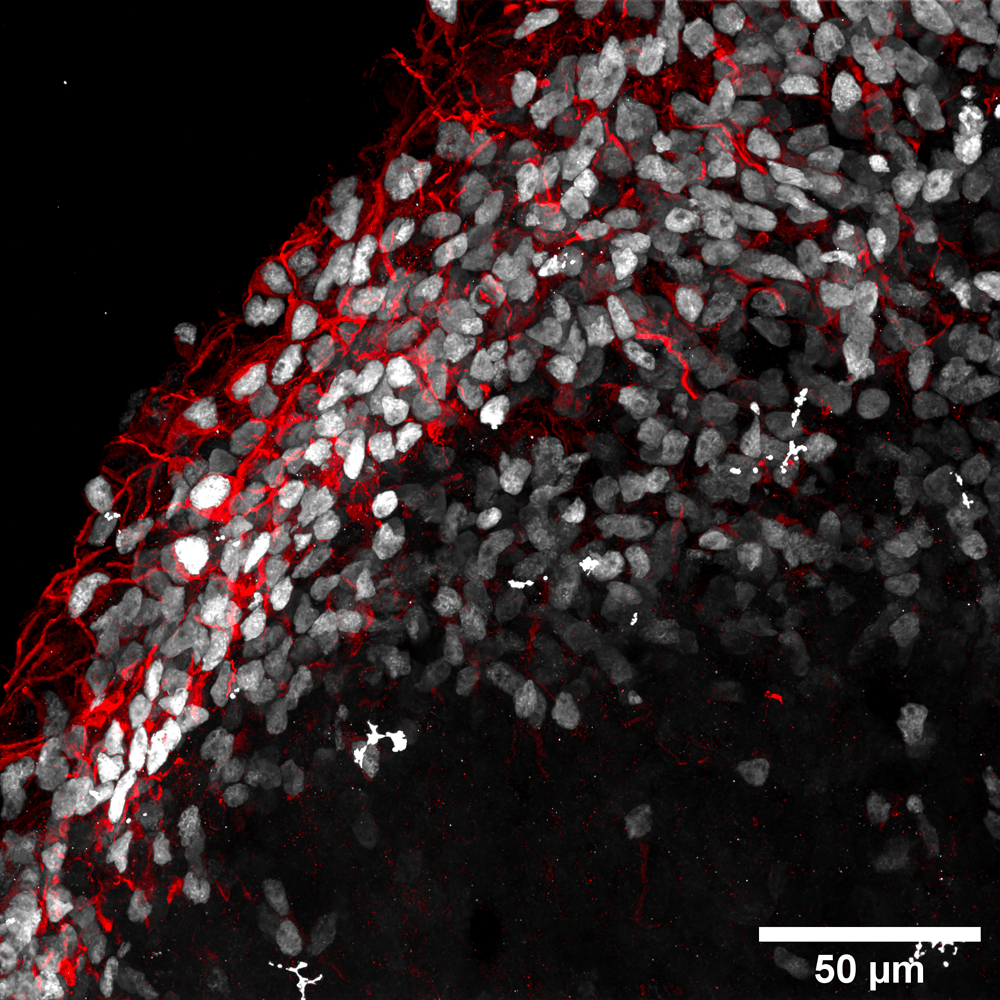 In conclusion, with CrestOptics X-Light V3 spinning disk it is possible to obtain in few minutes an image that represents a sample as complex as that of the cerebral organoids in its entirety, also using multiple wavelengths during high-sectioning of its entire thickness. At the same time, it is possible to go into more detail with higher magnifications to appreciate the three-dimensional architecture that the cells assume only in some portions of the sample, obtaining a very high-resolution image and, at the same time, avoiding photobleaching issues thanks to the extreme speed of this spinning disk system.

Figure A represents an intensity projection (MIP) of a day 50 human cerebral organoid and was acquired with a CFI Plan Apo Lambda 20X air objective (NA 0.75, WD 1) in a stack with z-step of 0.9 um and with 23 um of Z range.

Figure C images illustrate MIP of a day 50 human cerebral organoid acquired with a CFI Plan Apo Lambda 60X oil objective (NA 1.4, WD 0.13) in a stack with z-step of 0.3 um and with 21 um of Z range. These images were processed with Advanced Denoising (AdDen) and Deconvolution (Dec) algorithms through NIS-Elements software

Re-use of images from this article is done under the terms and conditions of the Creative Commons Attribution (CC BY) license.